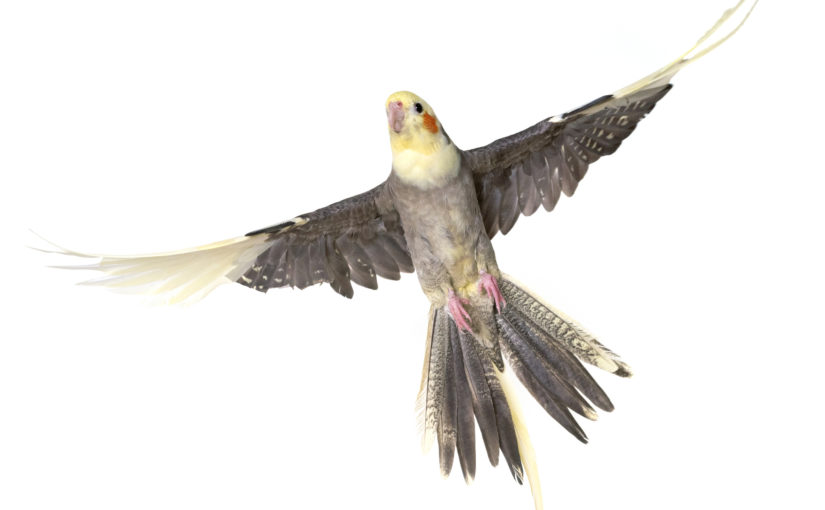 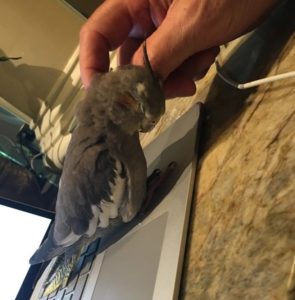 Have you ever noticed things that seem to work out even when the odds are against them?  You pause when the light changes … for no real reason … and someone runs the red light at high speed and you think “wow … they would have hit me and probably sent us all to the hospital!”  My wife and I use the phrase “it just so happened” to explain these “God Winks” as we refer to them.  Well, here is another one that just happened in our life.

It all started on a Friday evening when Susan and I went to grab some drinks and dinner with some friends at Smokerise Country Club. As usual, we sat outside to enjoy the evening air when we got there and one of our friends had heard a bird chirping which proved to be a cockatiel. She offered it her finger and it then hopped on her shoulder and just sat there happy to be with people again.  Clearly this bird had been part of a family and had become lost. If you Google this breed of parrot you will see they are incredibly social and just love to interact with people.

Since she had dogs at home she said she couldn’t bring it home and neither could anyone else there we met at the club, so we did. We at first kept it in a storage container overnight since we couldn’t locate a cage from friends. We had some bird seed for our feeders and put a cup of water in the container for the night.  The next morning I offered it a finger and it quickly hopped onto my shoulder and also looked for every opportunity to have its head and back petted. While we found it to be hilarious to be around, we are not pet people … we travel and work outside the home. So, my first priority was to see if I could locate its rightful home and report it found … without letting anyone know what it looked like so we could avoid scams or someone who just wanted a pet.

So, the first thing I did was to go online to figure out how you post the fact that you have found a pet that clearly belongs to another family. Figuring it was a long shot to find them, I also searched for how you could bring a bird to a shelter … and learned you can’t bring them to a bird dealer because of the risks of the bird bringing in a disease. I of course posted the fact that we had found a bird on my Facebook page but without any pictures or descriptions other than it was a cockatiel.  On the chance the bird was not lost locally, I also found a website for “lost and found” parrots designed specifically to reconnect these family members.  Three days later I get a picture of a bird that someone had lost and it was clearly the bird we had. Go figure … but the story gets even more interesting.

They offered a phone number to connect and I spoke to the mother of the young girl whose bird it was. The bird had escaped last November (10 months ago) and had its wings clipped so it could not fly. They lived in Marietta some 35 miles away.  Oh, if the bird could talk!  Perhaps someone had found it closer to their home and transported it? How many people had entered this bird’s life? After all, how could a bird with its wings clipped fly 35 miles and why to our country club? That is a story we probably will never know completely. What we do know is the bird was lost and now has been found.

She told me that her daughter was despondent and inconsolable after losing the bird. Her friends kept telling her not to lose faith … someone would find her bird and bring it back to her. When I told her I thought we had found her bird I asked her for some more pictures and sure enough it was clearly her bird. Cockatiels are quite varied in their colors and this one was a very unusual grey and white with color splotches.

At that point I shared the picture I took just before calling her where the bird insisted on having its head and backed scratched. That was the same action it took on Friday night. What I found most endearing however was her note back to me that if we had bonded she understood fully why we might want to keep the bird. She was just elated to know her friend was safe and found. There is certainly more to this story we can never fully know, but what we can know is that this bird is a model for how community works successfully in this digital age. For all the bad things we know and read about, I do hope this story is uplifting and encouraging. The bird is now back “home” finally.  The mother called it her “prodigal child.”  Oh if only birds could talk.  But, perhaps the beauty is in the mystery itself since they can’t.