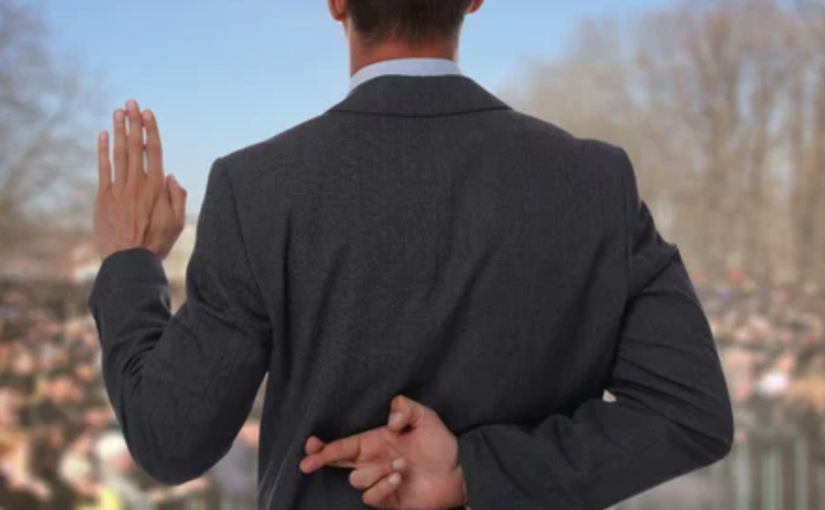 Perhaps the reason we use handshakes is to keep people from doing what this picture indicates: promising one thing and doing quite another.  The history for this superstition is a bit murky but all sources indicate it is a way of asking God’s forgiveness for telling a white lie.  While we males learn early on that answering the question, “does this dress make me look fat?” requires real care, the idea that answering a question where no harm is done by either avoiding the “truth” … in essence we are trying to protect the other person’s feelings.

We move away from a benign perspective when someone deliberately tells us one thing but has no intention of living up to the promise.  We often describe this by saying their actions speak louder than words.  Today’s greenwashing and virtue signaling prove this out.  We hear a lot of promises, but when we look at actual progress, we see the results coming up short.

Admittedly, some things can prove out of our control, so we promise based on our own heart’s intent, but we then run into the realities and unintended consequences.  Fair enough.  So, when you hear about large corporations making climate pledges, you should dig a bit deeper.  Here is a snippet from greenbiz.com summarizing climate promises:

“You might remember last year’s announcement from Cargill, ADM, Bunge & Co, in which they promised to finally work together as an industry to eliminate commodity-driven deforestation and align their supply chain emissions with a 1.5 degrees Celsius climate pathway. The latter requires going beyond forests to end all native vegetation conversion, which is notably absent in the trader’s work. The commodity companies pledged to publish a roadmap on how they would achieve these goals within a year.

And so they did. Unfortunately, that’s the only promise they kept since the roadmap itself fails to deliver the expected commitments to end deforestation and align their business practices with Paris climate goals.

In response to the roadmap, WWF’s U.S. president and CEO Carter Roberts wrote that it “demonstrates progress on palm oil and steps forward on beef but falls well short of what is needed on soy and falls short on expectations that the roadmap delivers what’s needed for a 1.5-degree future.”

You could just say this is human nature.  You could just imply that we now know more about how Scope 2 and Scope 3 emissions must be calculated and disclosed so we can truly monetize the longer-term perspectives.  Or, you could admit that we simply do not have the commitment in the first place … aka, we are hoping that this issue simply goes away if we sound like we care.

We just went through midterms … with lots of promises being made to “reach across the isle” and to move forward together as Americans.  One can hope.  But, are we really ready to bury the hatchets and work together?

History indicates it takes an external crisis to bring people together.  9-11 did that for a while.  The general rule in all of life is that you need a “common enemy” to rally public opinion.  So, we have seen Germany, Russia and perhaps now China take on this image.  But, the reality is that we all must “see” this common enemy.  The root problem in my mind is that we are not looking.